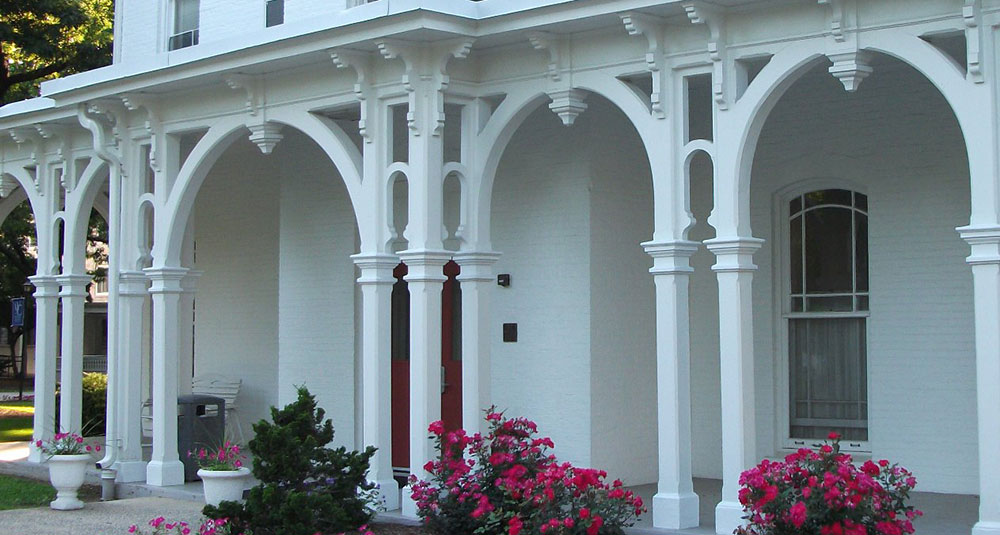 On May 16, 2013, the Wilson College Board of Trustees convened on campus for their spring meeting. Despite having been served with a demand letter, the Board of Trustees voted to revise the Articles of Incorporation so as to eliminate the undergraduate residential College for Women and end Wilson's core mission as a women's college.

Amy Allen Boyce ’73 has made her resignation letter public and a copy of it appears below.

It is with a heavy heart and no small measure of ruefulness that I tender my resignation from the Wilson College Board of Trustees, effective immediately.

I do so for a number of reasons, the strongest among them being a growing sense of discomfort with membership in such a heedless and dysfunctional body. I do not believe we are truly acting as good stewards of the college; rather we argue and compete with each other and achieve nothing. Wilson faces so very many challenges at this point in her history and literally cannot afford to be governed by such foolish and ineffective people.

Currently, I see very little need for our existence at all, since it is clear we are expected to approve any and every demand made by President Mistick, rather than working to oversee her in her leadership. I feel very strongly that she was the wrong choice for Wilson. This is a difficult thing to admit for everyone who had such high hopes for and belief in our next leader. President Mistick, however, clearly has no comprehension of what a unique and valuable institution Wilson has always been and I find her dismissive of much of what we hold dear. She is a manipulative politician, though, and has adroitly coerced a number of people, fellow trustees, alumnae, faculty members and students into eager, unquestioning support for her inappropriate, generic vision of the future of what was once a venerable and special college. She has also managed to create a toxic atmosphere of distrust and divisiveness, wreaking havoc of the mutual affection and respect all members of the Wilson community used to enjoy.

Wilson College deserves more than a Board of Trustees who are fearful rubberstampers, who cannot manage to get out of their own way and control such a feckless person. Yet, when any of us attempt to exercise their authority or question the efficacy of her management, we are treated as recalcitrant children and rebuked for our interference. I truly believe that Wilson is on a collision course toward what will be a tragic end. Coeducation is wrong on so many levels for our college and so are many of the kneejerk reactions being implemented as solutions to historic problems. I cannot honestly or sincerely take part any longer in such a charade.

I doubt if you can even begin to imagine how terribly depressed I am in having to compose this letter, John. I joined the Board with such willingness to serve and with such pride and optimism. Becoming a member of Wilson College's Board of Trustees was a tremendous honor for me. In just six months this important responsibility has become a sickening liability. I have not felt this kind of sadness, witnessing the deterioration and certain end of such a rare entity, since my mother died four years ago. How proud she would have been, and her sisters too, to know that I had been made a trustee of Wilson College, and how sorrowful they would be to see what you have allowed to happen.

At least I have the comfort of knowing that I acted in good faith, doing whatever I could to preserve Wilson's mission and keep our beloved college alive and true to herself, and that I did so knowing that my mother would have agreed with my choices and endorsements. Can you say the same? I don't think so.

I shall watch the coming debacle with sharp eyes and much consternation. But whether Wilson dies quickly or suffers a slow expiration as a third-rate community college, it will receive no support of any kind from me. 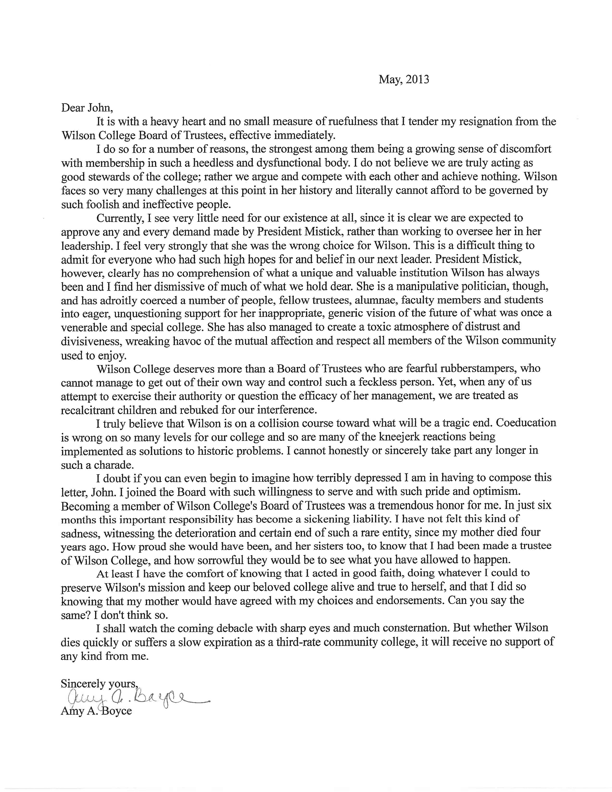